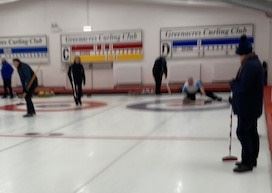 Two teams from Barrhead Fereneze took to the ice against Neilston on Saturday in the annual bonspiel. The Barrhead team skipped by Ian shadowed Ewen’s Neilston team at the start of the match before the Neilston team of Ewen, Billy, Margaret and Colin ended up four shots clear. In the other match the team of Andy R, James, Rhona and Graeme led from the start against Robert, ending up with a fifteen shot surplus.

Billy was presented with the trophy in the absence of the President who was unable to attend.