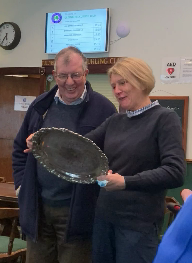 On Saturday Neilston played Barrhead Fereneze in the Jack Barr Memorial Salver albeit with the following social event unable to take place. Skipping a Neilston rink for the first time was Rhona with her team of Andy R, Ewen and Alan S who ran away with the match against the Fereneze team of Gordon, Robert, Katherine and Bill, the score 13-1. In the other match the light blues team of Ian, Iain, Linda and Irene faced the Neilston side of James H, Billy, Tom and Margaret S. This match was much closer with the teams swapping shots and the score after five ends stood at 3-2. However Neilston kept up the pressure and came out on top with a score of 12-2.